It has been almost 10 years that the Trio SR9, founded by Paul Changarnier, Nicolas Cousin and Alexandre Esperet in Lyon, has been sharing its passion with audiences around the world. Having achieved their studies at the CNSMD de Lyon with Jean Geoffroy et Henri-Charles Caget, the three percussionists and friends decided to embark on this human and musical adventure.

The Trio was awarded the 1st Prize of the « Percussion Trio 2012 » organised by the International Percussion Competition Luxembourg (and also the public prize, and the « lalux » prize for the best interpretation). In 2012 the Trio won the European Music Ensemble Competition organised by FNAPEC, and received the fellowship of the Banque Populaire Foundation in 2016. The Trio has since then become recognised and widely acclaimed on the musical scene.

Strengthened by these experiences, the Trio SR9 initiated several new projects which all express an open attitude towards a wide range of aesthetics. Spanning various repertoires, the ensemble renews the interpretation of works from our musical heritage for three marimbas (Bach, Mendelssohn, Stravinsky, Ravel, etc.) and collaborates with composers (François Tashdjian, Florent Caron-Darras, Balint Karosi, Daniel Arango-Prada) on the creation of new pieces.

Beyond its musical eclecticism, the Trio SR9 is eager to explore new approaches of the performance and therefore collaborates with artists coming from different backgrounds. The three members of the trio have themselves expanded their experience of the stage by incorporating theatre and dance to their work.

The shows produced by the trio reach all audiences and reflect an interdisciplinary research at the crossroads of artistic forms, genres and environments.

MACHINE(s) is the first show produced by the trio in 2015 with composers Pierre Jodlowski and Benoit Montambault. That same year, the trio tours with C O R P O R E L S and meets a young audience invited to discover a show built around multiple performing components and focusing on movement. In 2019, with the creation of JUKEBOX the Trio approaches theatre, dance and music alongside choreographer Simon Tanguy. 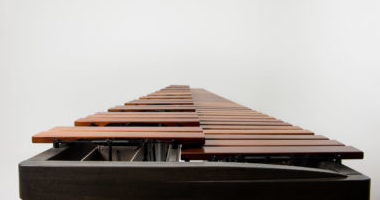 Keen on sharing its experience, the Trio SR9 often holds masterclasses, namely at Boston Conservatory, Juilliard School, New York University, University of Canterbury in Christchurch, but also in French and European conservatories. In 2018, the Trio taught participants at the International Marimba and Percussion Festival in Pleven (Bulgaria).

The Trio SR9 is supported by the French Ministry of Culture (DRAC Auvergne-Rhône-Alpes), the Auvergne-Rhône Alpes Region, the City of Lyon, SPEDIDAM, ADAMI, Bureau Export, Banque Populaire Foundation and Institut Français. It has been member of the FEVIS network since 2020.

The Trio SR9 is sponsored by ADAMS percussion and RESTA-JAY percussions.

The Trio SR9 has been associate artists of the Théâtre Théo Argence in Saint Priest since 2018.

Decide which cookies you wish to allow. You can modify these parameters at any time. However, this may result in certain functions no longer being available. For more information about deleting cookies, please consult your browser's help function. Find out more about the cookies we use.

With the slider you can activate or deactivate different types of cookies: